I appear to have had all my hair chopped off 😀  Renders my headshots slightly out of date, but it certainly feels good!  Hello Summer.  The pixie-esque crop will have useful photographic evidence soon-ish.

In less hair-based news – my show GLITCH made another appearance last week: I was support to 2 bands at The Lexington in Angel.  Wasn’t sure how it would go down in a gig setting, but it worked surprisingly well!

This Saturday I’m off out to do some Lois of the Lane air guitaring at The Stag’s Head in Hoxton for the legendary night that is Gypsy Hotel.  I’ve even bought me some rockin’ wristbands for the occasion.  Splendid. 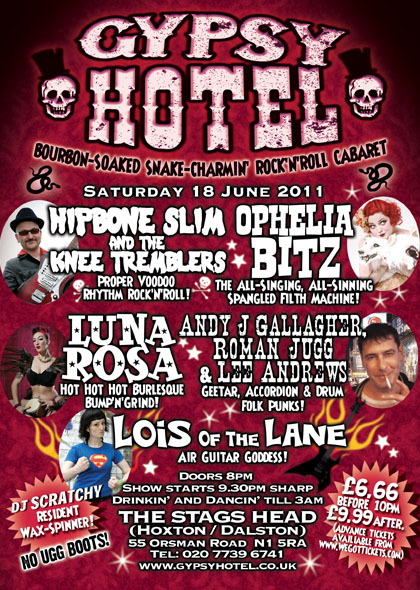 I’ve just come to the end of a long day’s sound editing on my computer and my brain is pretty fried, but I am determined to push a blog out before I collapse into bed.  Hmm… that sounds wrong.

The sound in question was a long overdue re-edit of my Lois of the Lane Air Guitar act which I’m going to be doing at tomorrow (today’s!) monthly Village Green Preservation Society night at The Betsey Trotwood.  Much happier with the act now – just got to find some time to rehearse it…

I’m back at The Betsey next Monday the 30th of May where I will be very pleased to be playing a couple of songs for John Hegley‘s monthly night.

The week after, on Saturday the 11th of June at 2pm, I’m going to be doing a one off performance of my show GLITCH in the Old Fire Station on Mayton Street (N7 6QT) for the Mayton Street Festival which is part of the Holloway Arts Festival.  It’s freeeeeeee!

Circuit went down really well the week before last and Iris Theatre have plans afoot to get it on again.  Here are some pictures of me as the malfunctioning musician android: 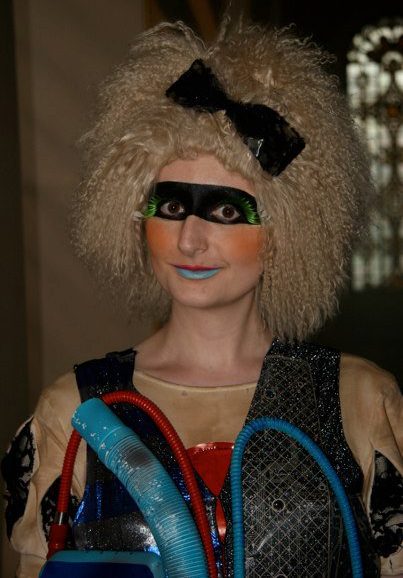 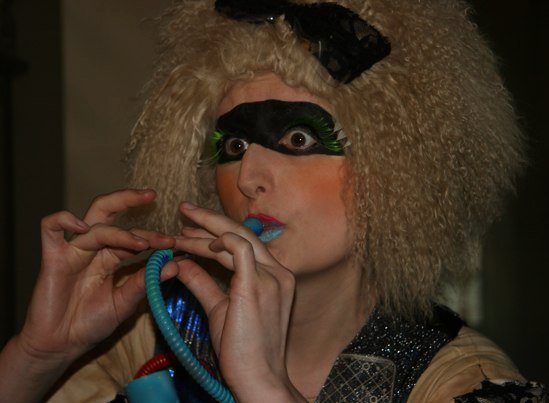 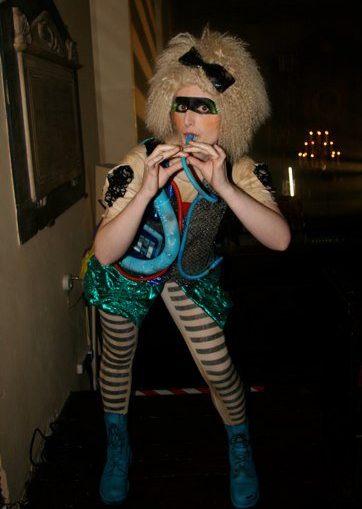 and here’s a snippet of my act:

Another 4 months appears to have zipped past.  They do that don’t they?

Well, in April I was being all tragic in a masked version of The Bacchae for Chris Vervain which was filmed for use in schools.  Helloooooooooooo Thebes!

In May I had another private Lois of the Lane gig and then subsequently found myself hanging out at Paul Zenon‘s cabinet of Curiosities at the Brighton Fringe: 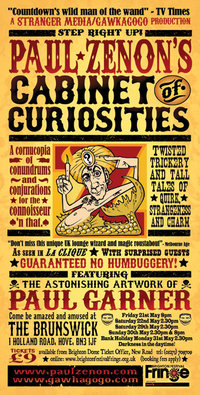 I was generally being a helpful sailor and keeping an eye on Paul Garner‘s freakshow artwork: 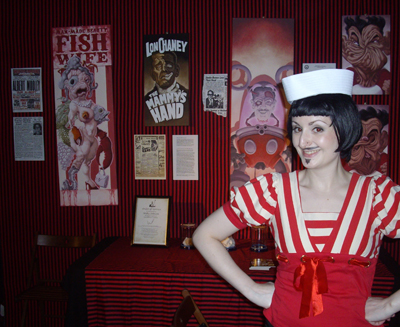 June saw me freaking out with the Gawkagogo Freakshow again – this time at the Udderbelly on the Southbank as part of the Time Out Live Friday Night Freakshow.  There was pigging and a bit of Siamese Twin action: 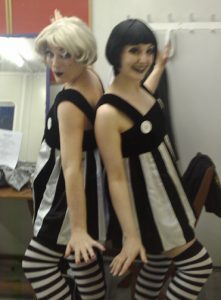 (Lots of black wig wearing going on over the past few months!)

Also finally put in an application to the Arts Council in June, for funding to re-develop and re-vamp Super Situation.  ALL TOES ARE CROSSED.  I’ve just been on a fund raising course too, so NOTHING WILL STOP ME…

Moving on to July, last Thursday I was part of Jennifer Farmer’s 10 minute slot during the Brand writers symposium at the Southbank Centre as part of the London Literature Festival.  She presented 4 small sections of piece she is developing entitled ‘thefadingcity’ which will ultimately be a large scale immersive theatre piece.  I was doing random, absurd, interactive improvised stuff with kitchen implements, imaginary toxic ingredients and song.  Love it 🙂

I’m putting on Super Situation and Glitch at the (almost) newly opened Waterloo East Theatre on Brad Street next week.  Here be map.  Also on the bill is ‘Baby Rice Cakes’ by Michele Hallak; performed by Michele and the Director of Super Situation: Jamie Rocha Allan.  (We have the honour of being the first professional shows on there – whoop!)  Important details below:

It’s part of the Best of Festivals season produced by Theatre6 which is warming up the theatre before it officially opens in September.  Looking forward to cracking on with rehearsals next week 🙂

In August I’m going to be disappearing off to the Edinburgh Fringe to do a bit of busking for just over a week.  As yet, I still have to dust off my guitar and come up with the songs, but, seemingly, I like a challenge!

Ooh, the joys of Spring 🙂

First up – I had a grand time performing Glitch at the British Library during January and February.  Thanks to all who came down and made it so enjoyable!  There are more performances of the show in the pipeline which I’ll keep you up to date with when I have more information.  At some point I’ll get round to uploading the great photos that were taken during the month.

Following on from this marvellous run, I’m now putting together a new one woman show for this year’s Edinburgh Fringe.  Expect a 50 minute extravaganza, in the same style as Glitch – no spoken words from me, an accompanying soundtrack with words, music and sound effects, ridiculousness etc.  I’ve got some great people on board already to help me with the project and I’m very excited to see what’s going to pop out of my brain.  I’ve already secured a fantastic venue so there’ll be more on this very soon.  Just got to find me some money from somewhere…

Lois of the Lane will be featuring in this new show, and in between me scrabbling around trying to get it all ready in time, she’ll hopefully still be venturing out every so often to do the odd gig here and there.  I took her over to Bob Slayer‘s comedy night at Dirty Dick’s a few weeks ago, which went really well, despite an initial technical panic.  Eep.

So, all go quite frankly – which is the way I like it!

Ignore the post below, Glitch for this evening is now GO GO GO!!

Unfortunately, due to the exciting snow situation (woo hoo!) the bit of the British Library I’m performing in will be closing at 5pm tonight, meaning that both of my shows this evening have been cancelled.

(I was all ready to battle in with my husky and snow shoes and everything.)

Despite what the radio silence of late may suggest, I can assure you that I did indeed make it back from the Edinburgh Fringe in one piece at the end of August – never you fear.  I had a very good, useful trip up there with me and my alter ego, meeting a whole host of lovely talented people and doing some storming gigs, performing for the Bongo Club Cabaret, Sideshow, Bob Slayer‘s ‘You Bastard’ and Carnival des Phenomenes.  Thanks to all who made it such a marvellous 2 mini trips.

Now, back at grindstone central, things are bubbling away nicely.  I’ve had a good few of gigs as Ms of the Lane – 3 back in September: Electric Mouse Comedy‘s one off re-creation of Bob Slayer‘s Edinburgh show at The Paradise; my second private gig and thirdly the Red Velvet Curtain Cult‘s ‘Lust and Luxuria’ night at Whitechapel Art Gallery where I premiered a new stoopid act, plus a gig in October at Resistance Gallery‘s ‘Anti Frieze’ party.  I’m back at the latter this weekend to perform as part of Lucha Britannia‘s Winter Weekender: 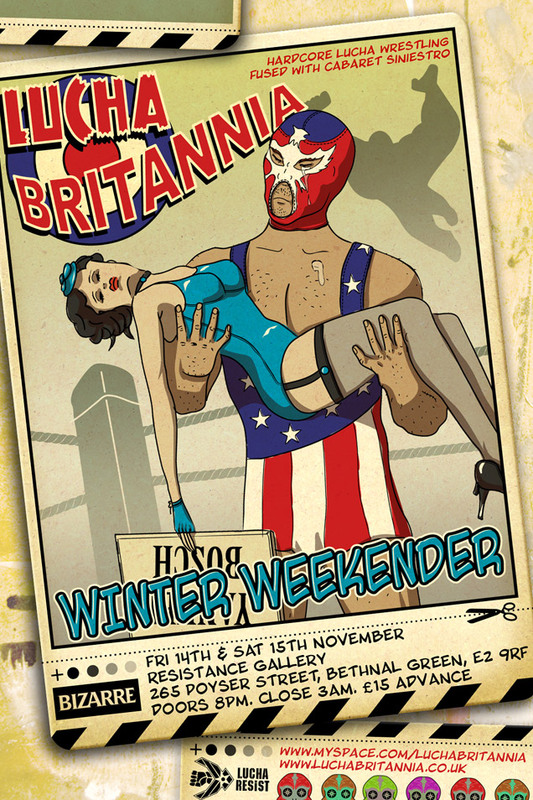 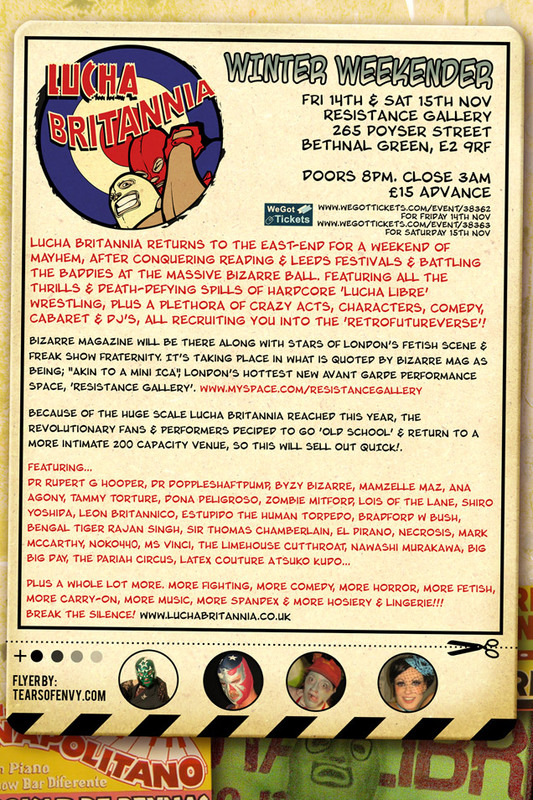 Aside from cabaret bits, my little one woman black comedy GLITCH is to be making an exciting re-appearance early next year.  I’ll be performing it at the British Library‘s Taking Liberties exhibition, Tuesdays and Saturdays from mid January to mid February:

Here’s the latest version of the blurb:

A 30-minute black comedy performance set in an imaginary near future.  A lone traveller finds herself trapped during an automated security check.  Rather than succumb to the totalitarian surveillance, she attempts to outwit the machine and make a bid for freedom.

There really is some great stuff going on as part of this exhibition so I’m over the moon to be involved in it!

Now onto the grand plan mentioned in the last post…  Well, not much in the way of juicy tidbits for you just yet, but to whet your whistle, I’m in the very early stages of developing a Feature Film.  It’s going to be a slightly surreal character comedy involving many of the bright and talented sparks that I know.  Very excited.  Updates will be posted here.

Can’t wait to get properly stuck in…

So, the latest round of Glitch performances went down a storm. Thank you to all of you who made it along and to all who helped out.  Another sell-out!!  I had a great time and managed to get a few photographs taken – a couple of which you can see below.  I look ever so serious… 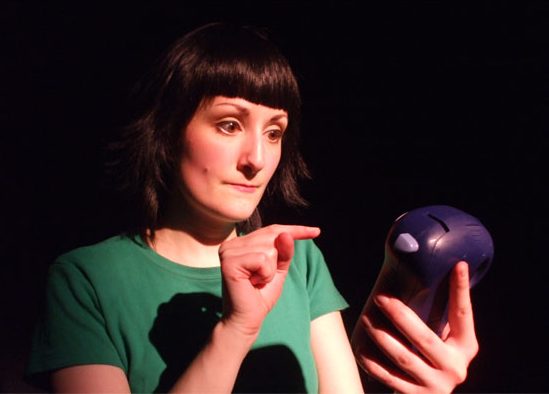 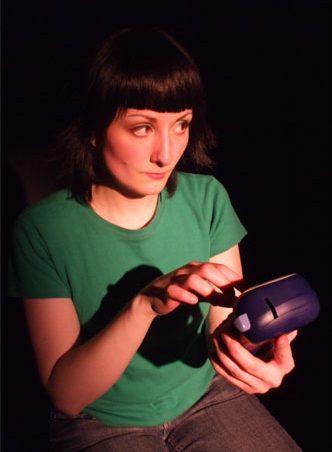 When I’ve got all of the pictures on my computer I’ll upload ’em properly.  Hopefully there’ll be more dates for Glitch, so watch this space.  Want to start developing a new project too…

I’ve got two Lois of the Lane gigs this week.  The first at Velvet‘s 9th Cabaret and Burlesque meetup at Madame Jojo’s on Thursday the 28th and the second at The Red Velvet Curtain Club‘s Lunacy evening at The Whitechapel Art Gallery on Friday the 29th.  Both should be very different and very entertaining evenings!

Then there’s another happening for the Gawkagogo Freakshow at The Vibe Lounge above the Vibe Bar on Brick Lane on March the 12th.  Here’s the back of the flyer: 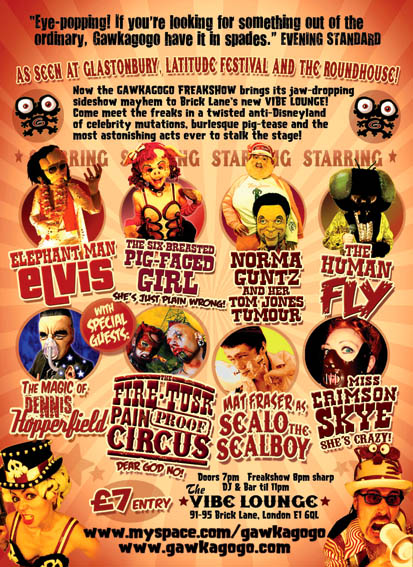 So if you missed the Barden’s show, now’s yer chance to see a revamped re-run!

Off to the kitchen now to go douse myself in some more honey and hot water.  I shall be triumphant.

Yup, my one woman dystopian black comedy Glitch is back and this time will feature me as my silent comedy alter ego Lois of the Lane. 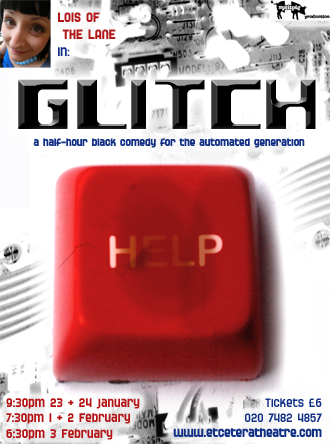 It’s playing at the Etcetera Theatre in Camden for 5 nights.  Get yer bottoms down there! 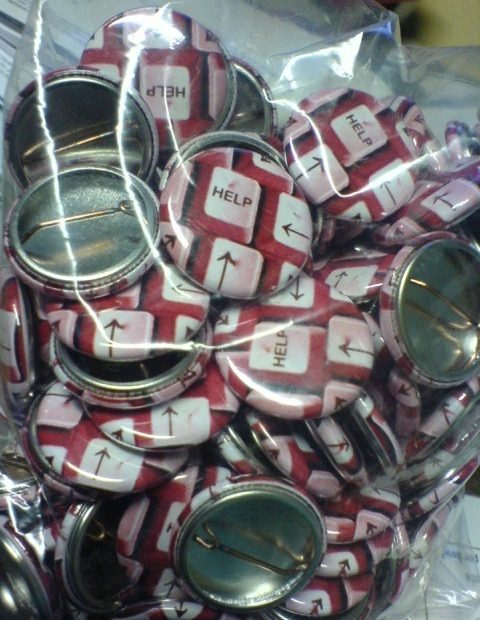 (Not that I’m trying to bribe you or anything.)

A little potted history of Glitch can be found on my Projects page and here’s the blurb:

‘Stay Safe!’ marks the dawn of a new era of security at Passport Control.  A few minutes and a short digital questionnaire later: you’re free to continue your onward journey.

Quick, simple efficient and painless: ‘Stay Safe!’ – for you, for us, for everyone.

What could possibly go wrong…?

December was a very Crimbly affair for meself (the usual rushing about the shops, sweating profusely and much merrymaking) but I did manage to appear as the Fairy Godmother in Total Rock‘s Christmas Panto ‘Cinderella Boberella’ for me mate Talita. 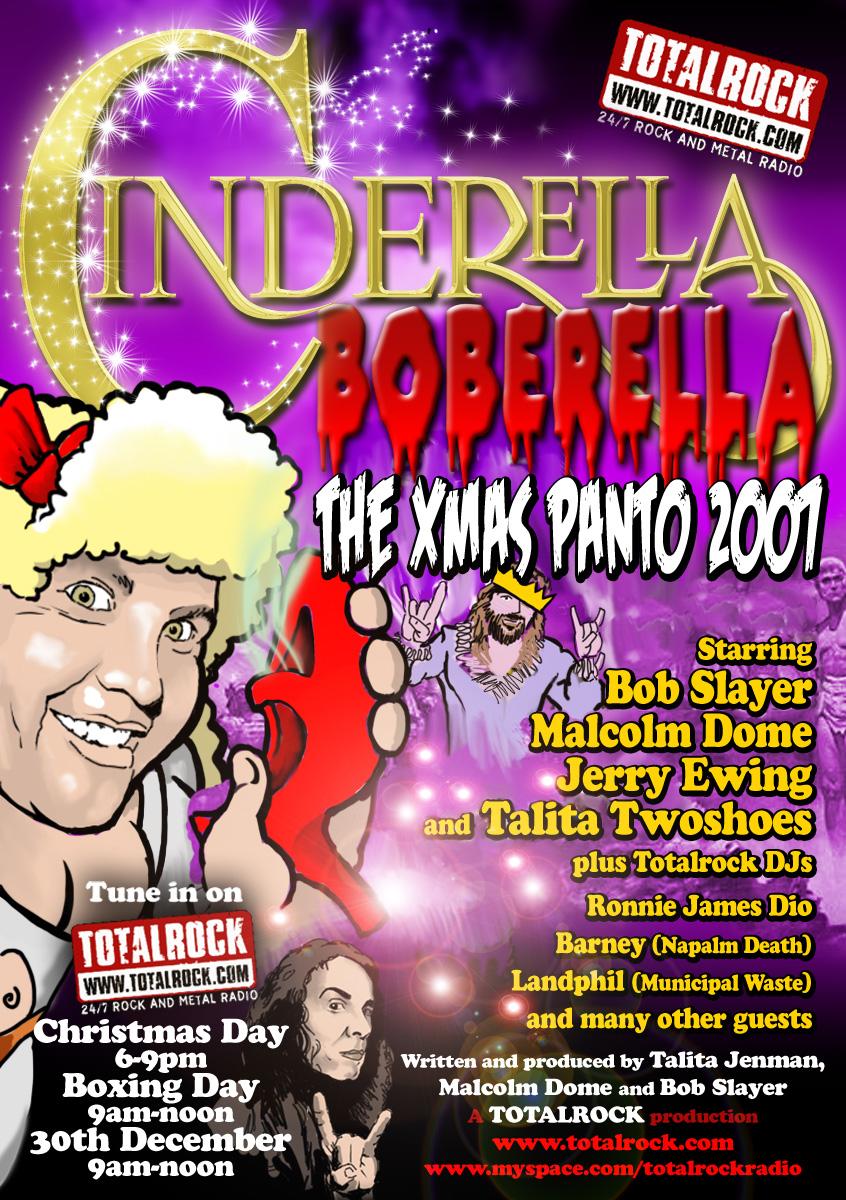 Bring it all on.

*Stop Press!*  My Edinburgh Festival creation ‘Glitch‘ is going to be doing the business in London on the 11th and 12th of January 2007. 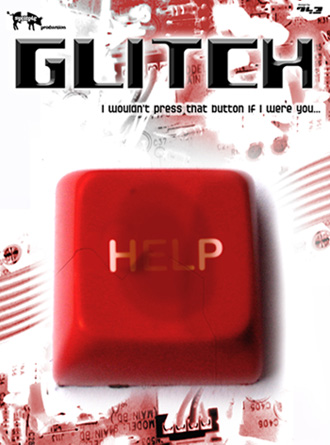 I’m on at 9:30pm at the Etcetera Theatre in Camden.

The ticket price of £6.50 includes a £1.50 membership fee (valid for a year) so you can go see the shows on before me at 7:30pm then just pay a £5er to enjoy the Glitch experience.

All the booking details are here, should you wish to book 🙂

Off tonight to be Hooters the Clown at the Press Launch of Paul Garner‘s Monster Art Exhibition.  Here’s the spiel:

Paul Garner’s art peers behind the curtain of a sinister sideshow underworld where cartoon geeks, zombie kids and unspeakable things from the slab mingle menacingly with the ones that the Scooby Doo gang let get away.

Spawned by a lifelong obsession with all things dark, Paul’s canvases conjure up the cast of a demonic Disneyland in which only Pugsley and Wednesday Addams’ dreams could come true; there are portraits of classic Universal horror film icons, grotesques who seem to have leapt from the pages of Famous Monsters magazine, sketchbook renderings of random monsters from Paul’s id… and more!

ORIGINAL ARTWORK AND PRINTS FOR SALE!!!

Must go and polish me nose…