After many, many hours of website updating – my brain is now more mushy than usual.  Some of it may be dripping out of my right ear.  Who can say…?  Now you can find: production photos from Glitch; a freshly tidied up singing page which now includes my new Zombie song that I recorded this week with my bro + 2 tracks recorded during my interview on Leith FM in August; my latest headshots and some fantastic photos taken during a shoot by Gavin Hill of Mecaniques Photography on the gallery page.  See below for an example of the latter: 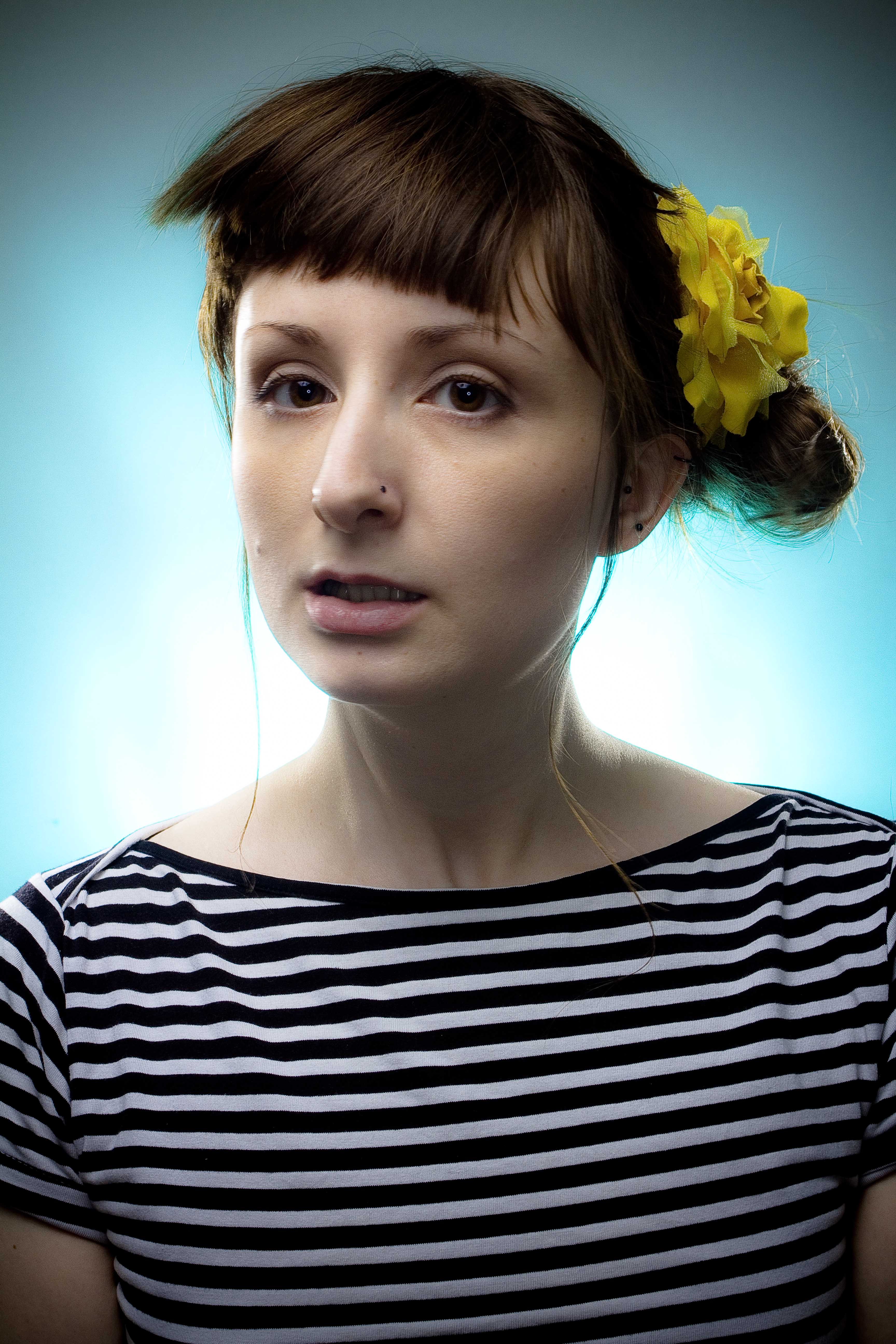 PLUS I’ve added some more photos to my MySpace photos page, including some great Lois of the Lane in action shots, one of these being this one, taken by Piglicker: 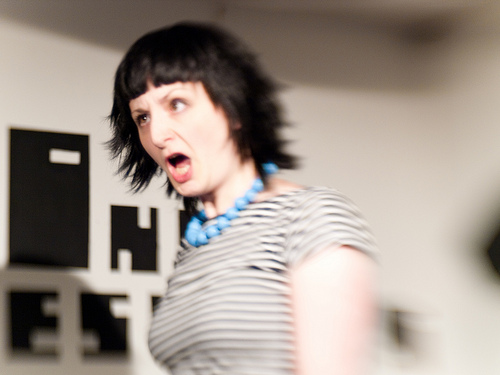 There has been a whole host of other general tidying up/updating bits including the expulsion of a sneaky rogue apostrophe.  (Ha ha!  I tame you, punctuation.)

Soon I can stop looking at a computer screen and all will be well.

In other news – No Suprises went down a storm last Saturday.  It was an overwhelming success and a whole heap of money was raised.  Very glad to have been a part of it.  Enjoyed myself muchly 🙂

This week, on Thursday the 28th, I’m playing at the Village Green Preservation Society‘s monthly night at The Betsey Trotwood again.  Last month’s was great!  This time, the theme is Tricks and Treats so my Last 2 Zombies song is making another appearance, along with another song I’m yet to write.  No idea what’s going to pop out.

For now though, I must switch off.  Night all.  Zzzzzzzzzzz…

Here are some more details about the one-off performance I’m in next Saturday.  I’ve got a really great part in a play called ‘No Surprises’, written by my friend Mikail Chowdhury.  He wrote it whilst doing the writers course at the Royal Court and is putting it on to raise money for a charity.

Set in the near future, the first Muslim Prime Minister of Great Britain is facing a terrorist attack and a nuclear crisis which threatens to pull the country into another lengthy and damaging conflict.  As he considers a dangerous course of action that could lead to the deaths of thousands of innocent lives he is faced with a younger version of himself.

As the Prime Minister tries to reconcile his past choices and religion with the consequences of his actions, the time for a decision draws closer and he is faced with the choice of making the ultimate sacrifice.

This dark comedy explores the question of whether the greater good is always the most right course of action, and how far would you go for your beliefs.

I’m playing Tahiya, the no-nonsense advisor to the Prime Minister.  She has a wonderfully dry sense of humour and I have some really great lines – sort of a cross between Margot from The Good Life, Malcolm Tucker from The Thick of It and CJ from the The West Wing…

This is the info about the charity:

We are setting up an initiative to provide medical care to women, their young children and immediate families in Dhaka (currently they have no medical treatment whatsoever and suffer badly as a result) and are working in conjunction with and NGO called Tarango (http://www.tarango-bd.org/) who do some excellent work taking destitute women and giving them training, a safe place to work, salary and independence.

We need to raise £3,000 for the first year and will provide a weekly on-site medical consultation service, pay for medication and provide seminars on things such as family planning, sexual and women’s health issues.

with the performance starting at 2:45pm

Rehearsals started this week and it’s going to be one step up from a rehearsed reading – we’re probably still going to be using scripts, but it will be staged.  (Need to carry on getting my lines in my head today…)  It’s a really great show with a very good cast and I’m really looking forward to it 🙂

I’m currently sat all beatnik-ed up in my room, ready to go and perform at the inaugural night of The Village Preservation Society‘s monthly residency at The Betsey Trotwood this evening.

Slight changes (or rather: additions) are now afoot in my cabaret offerings following my jaunt up to the Edinburgh Fringe last month.  I went up to busk on the mean streets of the Royal Mile and prepared some cover versions and original bits to sing and play guitar to.  I even made the very serious investment of purchasing a kazoo and bastardised harmonica holder to spice up the proceedings.

Considering I would never have dreamt of singing and playing in front of people under normal circumstances, coupled with the fact that I haven’t picked up my guitar regularly for ages, it went really well!  I made a few bob (I do really mean ‘few’), didn’t have rotten food thrown at me and massively upped my confidence levels.  I had NOWHERE NEAR as big a crowd as some of the old hands, but it was muchly useful nonetheless.

I subsequently had a radio interview on Leith FM, where I played a couple of my original songs (I’ll upload the catchily titled ‘A Chinese Food Loving Vegetarian’s Lament’, based on a song you’ll aaaaall know, soon…) and a couple of gigs at the legendary Bongo Club Cabaret where I had a fantastic time and realised that playing and singing in front of people and actually speaking(!) in between that, isn’t actually all that bad.  Lovely friendly place to discover that.  Thank you Bongo and Rhymes with Purple!  Who’d’ve thunk it?  Lois of the Lane made a brief but triumphant appearance at the Bongo too.  She’s definitely here to stay 🙂

So, on the back of this, I’ve decided to start writing some more songs and do them on the comedy/cabaret circuit – as well as Ms of the Lane – and this evening I’m premiering a jaunty new song entitled ‘The Last 2 Zombies in the World‘ which I knocked out on Sunday.  A month or so early I suppose, but it’s good to be prepared.  (You never know when they might strike..)  I’ll get it recorded at some point soon and stick it on my singing page.  Keep your eyes/ears peeled for more…

Since I’ve been back from the beautiful ‘burgh I was a part of Jennifer Farmer‘s première performance of her new immersive theatre/sound play ‘Conversations I Wish I Could Overhear’ which was part of the Spit ‘n’ Scrub open studios at ASC Studios in Bow.  I’ve also just found out that I’ve got a cracking part in a great piece called ‘No Surprises’ by Mikail Chowdhury, that’s going to be part of a one off charity event on the afternoon of Saturday 16th of October.  More details on this one soon.  Really looking forward to getting my teeth into it!

Until then, here’s a couple of picture of me busking on the Southbank, just before heading up to Edinburgh, taken by my friend Sarah: 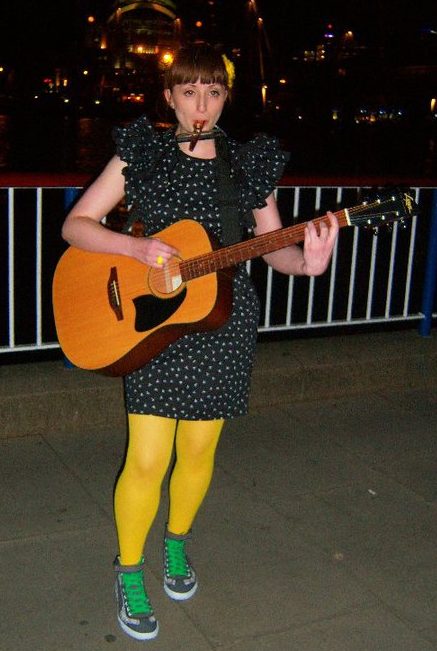 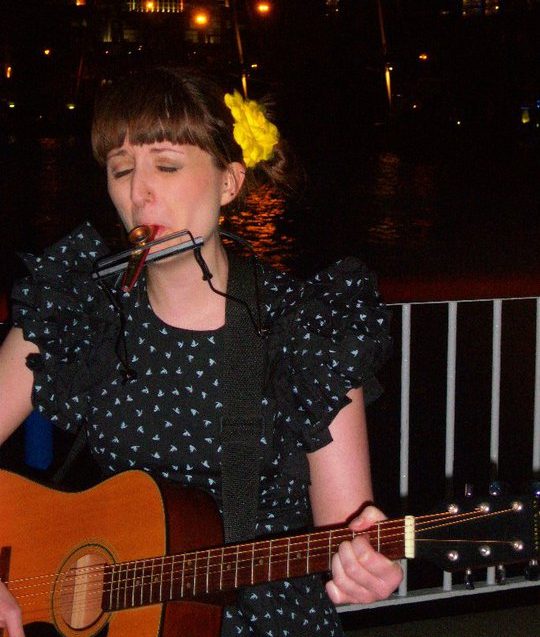