I’ve written and produced three solo shows so far.
All visual, black comedies, wordlessly performed by my alter ego Lois of the Lane, to a continuous soundtrack
featuring voice over, music and sound effects. 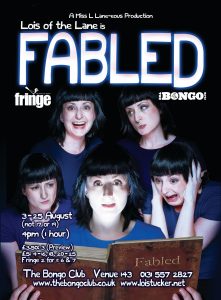 Finding herself as part of an unlikely storytelling set-up
with only her wits and a bottomless suitcase to hand,
Miss of the Lane will endeavour to entertain,
against all odds…

Clips from the show here.

Songs from the show here. 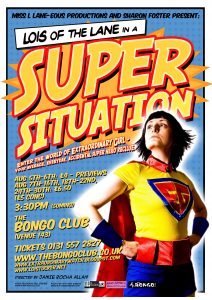 Following exposure to a mysterious chemical
at the hands of evil genius Megalomaniac Man,
Extraordinary is one of the members of the Government funded
Unstoppable 5; always ready to come to the rescue
(not leaving a great deal of time for much else…).

Join her for a week in her life as she battles oversized animals,
saves the Universe and drinks one helluva lot of tea… 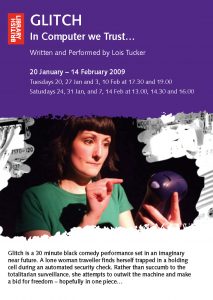 A lone woman traveller finds herself trapped in a holding cell
during a routine security check.
Rather than succumb to the increasingly totalitarian surveillance,
she attempts to outwit the machine and make a bid for freedom –
hopefully in one piece…

Performed 20 times at the The British Library in January/February 2009
as part as their Taking Liberties exhibition.

Prior to all these was the production Deeper Underground, which kicked off the whole style for me!
Created with 3 drama school co-horts, you can find more information about it here. 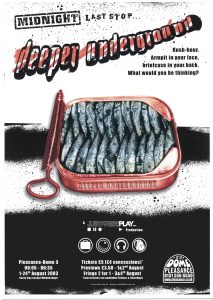 Rush hour:
armpit in your face; briefcase in your back; going nowhere fast.

Four strangers rammed in a carriage with no way out.