Good grief, a whole heap of a lot of stuff has happened since I last posted on here.  Wearisome wi-fi woe has been holding me back on the update front, but now I am victorious (haha wireless router – I have tamed you!  Feel my power!) and ready to spill all sorts of beans and the like.

So, first up – Lois of the Lane, my cabaret creation.  She’s a smiley silent comedy girl with a penchant for a bit of ridiculousness.  The blurb so far:

Lois of the Lane – Nerd of few words.  Snazzy dresser.  Sharp mover.  Lover of fine music and fine unexpectedness.  Eater of cheese.  Wearer of eyebrow.  Purveyor of the most delicious bite-sized chunks of silent comedy this side of Vaudeville.  You have been warned!

Each of my acts, otherwise known as ‘Random Acts of Ridiculousness‘ are around 4-5 minutes long and comprise of much stupidity 🙂  I currently have 3, (very nearly 4) ready and raring to go, entitled ‘Opus One’, ‘The Box of 1,000 Dances’ and ‘Showdown’.

My first gig at the opening night of Red Dress‘ Supper Club: ‘You Little Minx’ on the 29th of June was a storming success.  This is me, mid ‘Box of 1,000 Dances’, photographed by Moira Lovell: 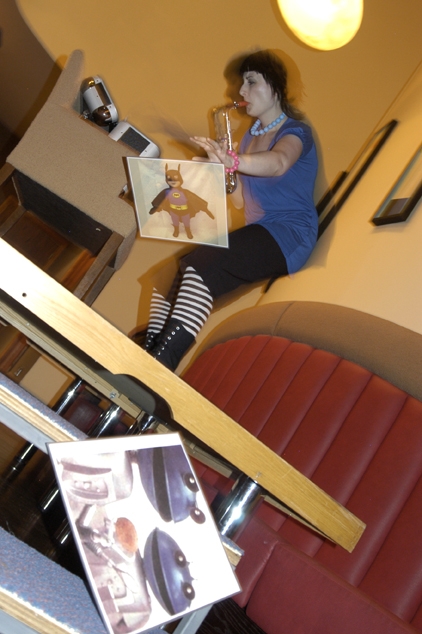 My next gigs will be at The Vaudeville Cabaret Club during the last 10 days of the Edinburgh Festival Fringe.  When I have exact dates, I’ll post ’em.

I’m getting some ‘Lois of the Lane‘ promotional photos done, then there’ll be a whole re-vamp of my website to accommodate my new alter ego.  Lots and lots to do… 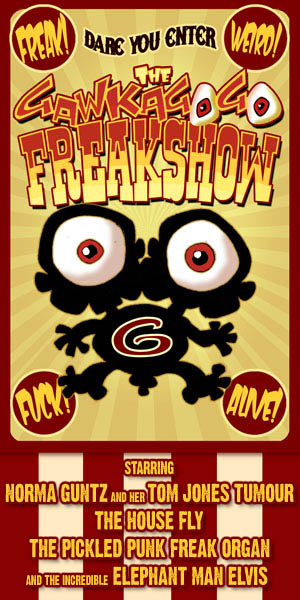 We had a fantastic time at the Glastonbury and Latitude festivals.  A constant stream of people, endless queues to get in and a bit of coverage on Channel 4 in the form of Carling’s Festival Postcards.   You can watch our bit in the show here:

Now it’s off to the Pleasance at the Edinburgh Festival Fringe with us and the micro carny tent.  Information and stuff here.  We’re on from the 18th – 27th of August, playing every 15 minutes from 7pm – 9pm and we are one of the 20 must-see acts at the Edinburgh Fringe.  You definitely must see us then.

While we’re up there, Paul‘s got another exhibition going at the Hula Juice Bar, Grassmarket.  Details here.

Lastly, Gawkagogo joined the Fire Tusk Pain Proof Circus at their spectacular gig at The Roundhouse on the 27th of July, as part of the ‘Circus Front’ season.  I had much fun clowning around as Hooters 🙂  Here be gallery: 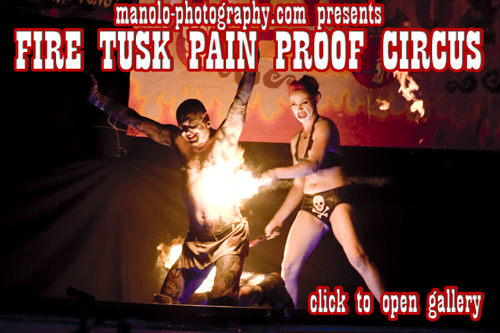 (Actually, this is lastly – pictures from Glastonbury and Latitude:) 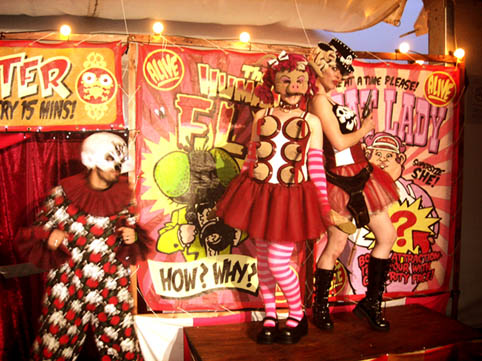 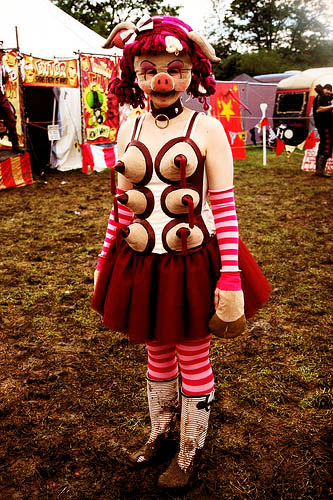 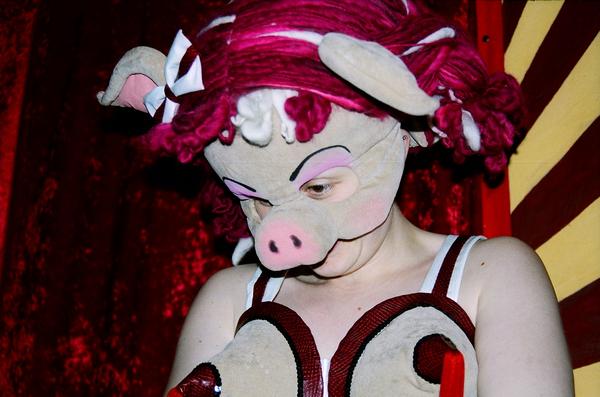 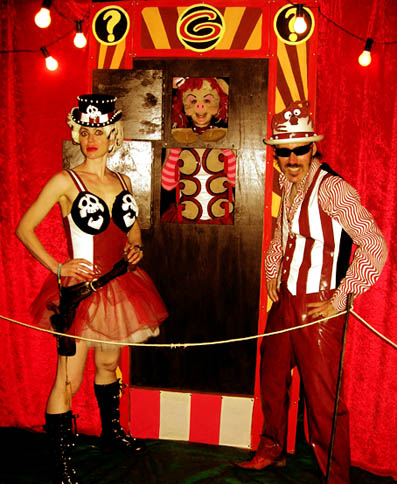 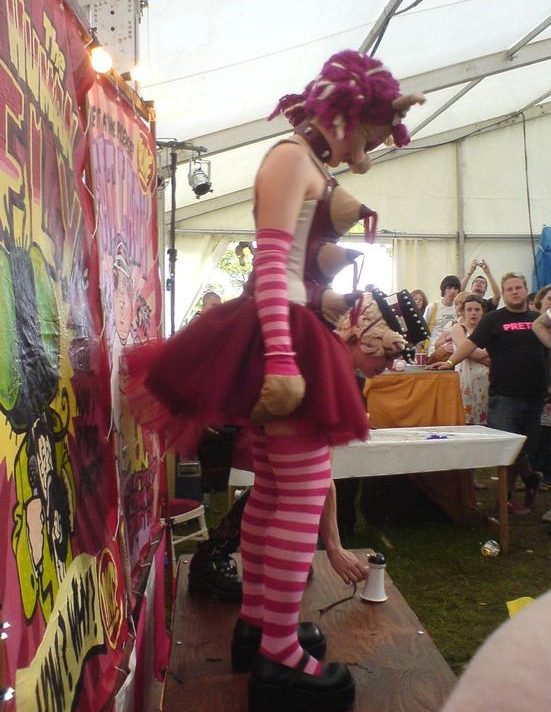 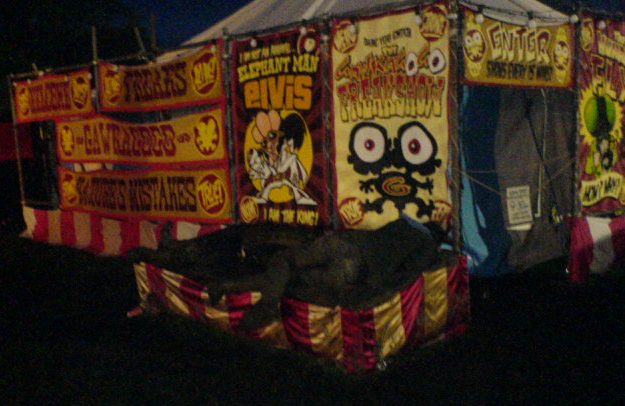 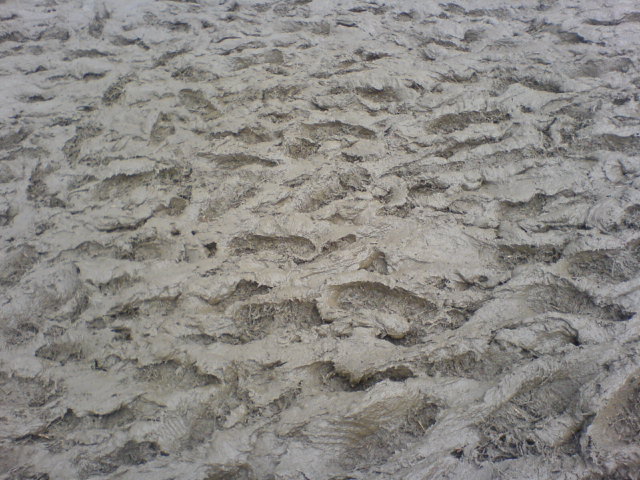 This summer is looking to be a rather enjoyable one with me disappearing off to 3 festivals: Glastonbury, Latitude and the Edinburgh Festival Fringe as part of the Gawkagogo Freakshow:

“A new fast-paced, edgily funny modern rockabilly pop-culture twist on a classic freakshow – but compacted in time and space!  Using the classic grind show format, Gawkagogo Freakshow consists of a rapid-fire, action-packed 15-minute freakish variety bill.  The show features quick-change cartoon-style costumes, weird puppetry, stage illusion and audience interaction, to produce an experience unlike anything the audience has ever seen before.  Introduced and run by the trio of Gawkagogo hosts, the Freakshow features a varying bill including some of the acclaimed Gawkagogo roster of characters, like: Elephant Man Elvis (“Comedy Genius” LONDON EVENING STANDARD), Dali Parton, Norma Guntz and her Tom Jones Tumour, Dennis Hopperfield The House Fly Liberarnie, Mentalo: Master Of Mentalism, The Invisible Man Magician.”

Gawkagogo‘s ‘C*nt Bingo’ was nominated for “Most Original Act” in the this year’s Ministry of Burlesque Awards following our appearance at Candy Box in February.  I thoroughly enjoyed meself, dancin like a loon, at the awards ceremony at The Pigalle Club on Sunday.  (No one was harmed during said dancing.  Well, as far as I know.)

With all of this cabaret stuff I seem to have got myself into, it’s about time I sorted out my own act, which is what I’m doing right now.  More on this soon…

I also want to get some music stuff on here, so I should be sorting that out and uploading it when it’s ready to go.

Old news that I didn’t get round to posting in time:

I was one of the voices in the afternoon play ‘Delayed Departures’ last week on Radio 4, written by Matthew Solon, Produced/Directed by John Dryden and starring Matthew Solon, Samantha Bond and Robert Gwylim.  Bizarre to be doing Airport Announcements after Glitch!  Here’s me (whilst we were recording in a hotel room) with some of the equipment, looking like a Russian Spy: 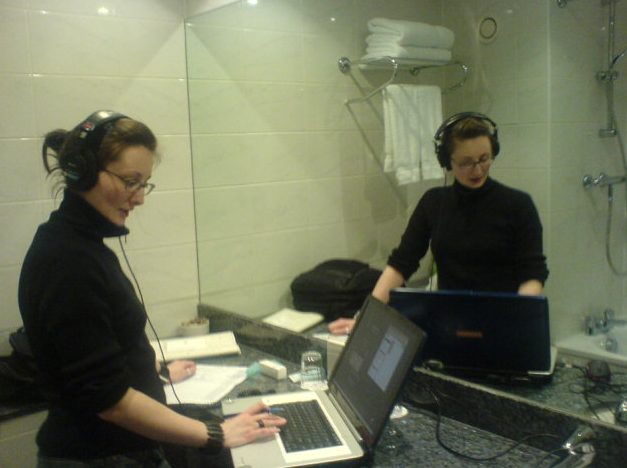 Ooh, here’s another photo of me (it’s all me, me, me…) as the Demon Barber Bearded Lady in Gawkagogo‘s Damnation Alley at The Texas Chainsaw Travelling Horror Picture Show‘s 1st Birthday Massacre in March: 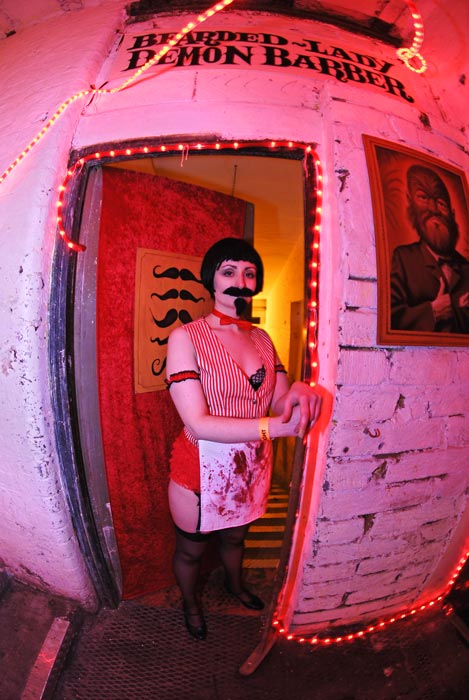 It was rather freezing in my doorway, but it was well worth it.

Right, back to shaking my brain around a bit to see what comes out…